I’m constantly surprised at just how popular resources related to ‘.NET Internals’ are, for instance take this tweet and the thread that followed:

If you like learning about '.NET Internals' here's a few talks/presentations I've watched that you might also like. First 'Writing High Performance Code in .NET' by Bart de Smet https://t.co/L5S9BsBlWe

All I’d done was put together a list of Presentations/Talks (based on the criteria below) and people really seemed to appreciate it!!

To keep things focussed, the talks or presentations:

I also added these 2 categories:

If I’ve missed any out, please let me know in the comments (or on twitter)

In fact, just watch all the talks/presentations that Sasha has done, they’re great!! For example Modern Garbage Collection in Theory and Practice and Making .NET Applications Faster

This talk is a great ‘how-to’ guide for PerfView, what it can do and how to use it (JIT stats, memory allocations, CPU profiling). For more on PerfView see this interview with it’s creator, Vance Morrison: Performance and PerfView.

Writing High Performance Code in .NET by Bart De Smet (he also has a some Pluralsight Courses on the same subject)

State of the .NET Performance by Adam Sitnik (slides)

How to write high-perf code that plays nicely with the .NET GC, covering Span<T>, Memory<T> & ValueTask

Primarily a look at how to benchmark .NET code, but along the way it demonstrates some of the internal behaviour of the JIT compiler (Andrey is the creator of BenchmarkDotNet)

Joe Duffy (worked on the Midori project) shows why C# is a good ‘System Programming’ language, including what low-level features it provides 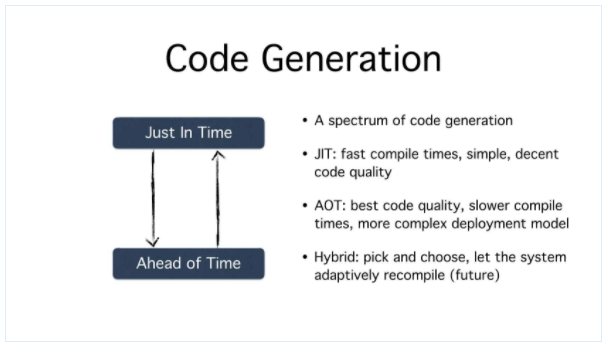 FlingOS - Using C# for an OS by Ed Nutting (slides)

Shows what you need to do if you want to write and entire OS in C# (!!) The FlingOS project is worth checking out, it’s a great learning resource.

Maoni Stephens on .NET GC by Maoni Stephens who is the main (only?) .NET GC developer. In addition CLR 4.5 Server Background GC and .NET 4.5 in Practice: Bing are also worth a watch.

An in-depth Q&A on how the .NET GC works, why is does what it does and how to use it efficiently

Whilst it mostly focuses on performance, there is some great internal details on how the JIT generates code for ‘de-virtualisation’, ‘exception handling’ and ‘bounds checking’

Making .NET Core (the CoreCLR) work on OSX was mostly a ‘community contribution’, this talks is a ‘walk-through’ of what it took to make it happen

.NET Core & Cross Platform by Matt Ellis, one of the .NET Runtime Engineers (this one on how made .NET Core ‘Open Source’ is also worth a watch)

Discussion of the early work done to make CoreCLR ‘cross-platform’, including the build setup, ‘Platform Abstraction Layer’ (PAL) and OS differences that had to be accounted for

This talk discusses which parts of the CLR had to be changed to run on Unix, including exception handling, calling conventions, runtime suspension and the PAL

Everything you need to know about .NET memory by Ben Emmett (slides)

The Channel 9 videos recorded by Microsoft deserve their own category, because there’s so much deep, technical information in them. This list is just a selection, including some of my favourites, there are many, many more available!!

I can’t recommend these yet, because I haven’t watched them myself! (I can’t break my own rules!!).

But they all look really interesting and I will watch them as soon as I get a chance, so I thought they were worth including:

If this post causes you to go off and watch hours and hours of videos, ignoring friends, family and work for the next few weeks, Don’t Blame Me