If you’ve ever spent time debugging .NET memory dumps in WinDBG you will be familiar with the commands shown below, which aren’t always the most straight-forward to work with! 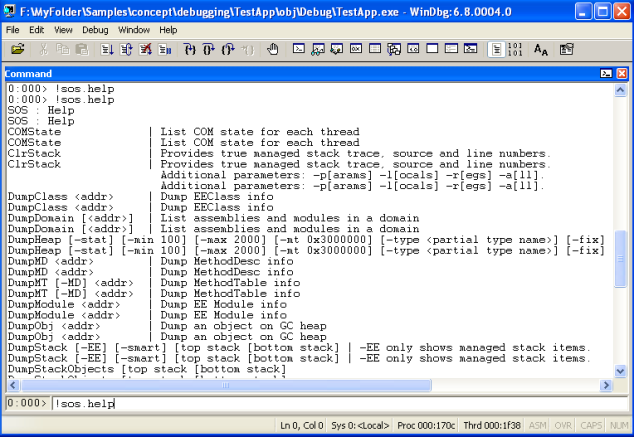 However back in May 2013 Microsoft released the CLR MD library, describing it as:

… a set of advanced APIs for programmatically inspecting a crash dump of a .NET program much in the same way as the SOS Debugging Extensions (SOS). It allows you to write automated crash analysis for your applications and automate many common debugger tasks.

This post explores some of the things you can achieve by instead using CLR MD, a C# library which is now available as a NuGet Package. If you’re interested the full source code for all the examples is available.

Getting started with CLR MD

This post isn’t meant to serve as a Getting Started guide, there’s already a great set of Tutorials linked from project README that serve that purpose:

However we will be looking at what else CLR MD allows you to achieve.

I’ve previously written about the Garbage Collectors, so the first thing that we’ll do is see what GC related information we can obtain. The .NET GC creates 1 or more Heaps, depending on the number of CPU cores available and the mode it is running in (Server/Workstation). These heaps are in-turn made up of several Segments, for the different Generations (Gen0/Ephememral, Gen1, Gen2 and Large). Finally it’s worth pointing out that the GC initially Reserves the memory it wants, but only Commits it when it actually needs to. So using the code shown here, we can iterate through the different GC Heaps, printing out the information about their individual Segments as we go:

But knowing what’s inside those heaps is more useful, as David Fowler nicely summed up in a tweet, strings often significantly contribute to memory usage:

Now we could analyse the memory dump to produce a list of the most frequently occurring strings, as Nick Craver did with a memory dump from the App Pool of a Stack Overflow server (click for larger image):

However we’re going to look more closely at the actual contents of the string and in-particular analyse what the underlying encoding is, i.e. ASCII, ISO-8859-1 (Latin-1) or Unicode.

By default the .NET string Encoder, instead of giving an error, replaces any characters it can’t convert with ‘�’ (which is known as the Unicode Replacement Character). So we will need to force it to throw an exception. This means we can detect the most compact encoding possible, by trying to convert to the raw string data to ASCII, ISO-8859-1 (Latin-1) and then Unicode (sequence of UTF-16 code units) in turn. To see this in action, below is the code from the IsASCII(..) function:

Next we run this on a memory dump of Visual Studio with the HeapStringAnalyser source code solution loaded and get the following output:

The most interesting part is reproduced below:

Hopefully this post has demonstrated that CLR MD is a powerful tool, if you want to find out more please refer to the links below: