Benchmarking is hard, it’s very easy to end up “not measuring, what you think you are measuring”

Update (2014-09-23): Sigh - I made a pretty big mistake in these benchmarks, fortunately Reddit user zvrba corrected me:

Yep, can’t argue with that, see Results and Resources below for the individual updates.

To start with, lets clarify what types of benchmarks we are talking about. Below is a table from the DEVOXX talk by Aleksey Shipilev, who works on the Java Micro-benchmarking Harness (JMH)

He then goes on to say:

This post is talking about micro and nano benchmarks, that is ones where the code we are measuring takes microseconds or nanoseconds to execute.

Let’s start with a nice example available from Stack Overflow:

Now there is a lot of good things that this code sample is doing:

Now far be it from me to criticise a highly voted Stack Overflow answer, but that’s exactly what I’m going to do! I should add that for a whole range of scenarios the Stack Overflow code is absolutely fine, but it does have it’s limitations. There are several situations where this code doesn’t work, because it fails to actually profile the code you want it to.

But first let’s take a step back and look at the simplest possible case, with all the code inside the function. We’re going to measure the time that Math.Sqrt(..) takes to execute, nice and simple:

That’s 5 million operations per millisecond, I know CPU’s are fast, but that seems quite high!

For reference, the assembly code that the JITter produced is below, from this you can see that there is no sqrt instruction as we’d expect there to be. So in effect we are timing an empty loop!

Note: To be able to get the optimised version of the assembly code that JITter produces, see this MSDN page. If you just debug the code normally in Visual Studio, you only get the un-optimised code, which doesn’t help at all.

One of the main problems with writing benchmarks is that you are often fighting against the just-in-time (JIT) compiler, which is trying to optimise the code as much as it can. One of the many things is does, is to remove code that it thinks is not needed, or to be more specific, code it thinks has no side-effects. This is non-trivial to do, there’s some really tricky edge-cases to worry about, aside from the more obvious problem of knowing which code causes side-effects and which doesn’t. But this is exactly what is happening in the original profiling code.

Aside: For a full list of all the optimisations that the .NET JIT Compiler performs, see this very thorough SO answer.

So let’s fix the original code, by storing the result of Math.Sqrt in a variable:

Note: result has to be a class-level field, it can’t be local to the method, i.e. double result = Math.Sqrt(123.456). This is because the JITter is clever enough to figure out that the local field isn’t accessed outside of the method and optimise it away, again you are always fighting against the JITter.

So now the results look like this, which is a bit more sane!

One other thing you have to look out for is whether or not the time spent running the loop is dominating the code you want to profile. In this case Math.Sqrt() ends up as a few assembly instructions, so less time is spent executing that, compared to the instructions needed to make for (..) loop happen.

To fix this we can unroll the loop, so that we execute Math.Sqrt(..) multiple times per loop, but to compensate we run the loop less times. The code now looks like this:

And now the result is:

So we are now doing 212,766 ops/millisecond, compared to 147,059 when we didn’t unroll the loop. I did some further tests to see if unrolling the loop 20 or 40 times made any further difference and if did continue to get slightly faster, but the change was not significant.

These results were produced by running the code in RELEASE mode and launching the application from outside Visual Studio, also the .exe’s were explicitly compiled in x86/x64 mode and optimisations were turned on. To ensure I didn’t mess up, I included some diagnostic code in the application, that prints out a message in red if anything is setup wrong. Finally these tests were run with .NET 4.5, so the results will be different under other versions, the JIT compilers have brought in more and more optimisations over time.

As seen in the chart below the best results for 64-bit (red) were achieved when we unrolled the loop (“ProfileDirectWithStoreUnrolled”). There are other other results that were faster, but in these the actual code we wanted to profile was optimised away by the JITter (“Profile via an Action”, “ProfileDirect” and “ProfileDirectWithConsume”). 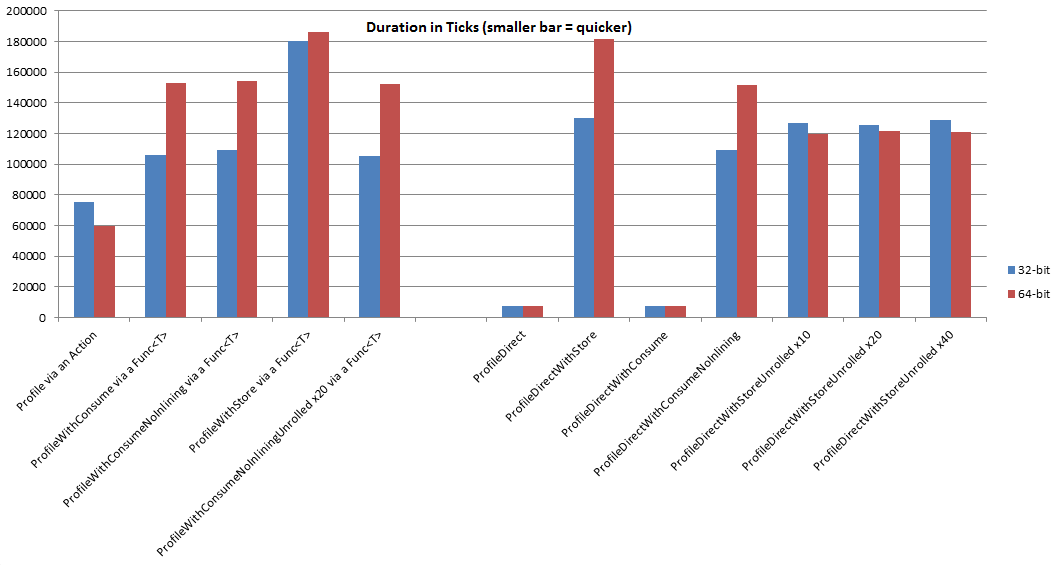 You might have noticed that the 32-bit and 64-bit results in the graph vary per test, why is this? Well one reason is the fundamental difference between 32-bit and 64-bit, 64-bit has 8 byte pointers compared to 4 byte ones in 32-bit. But the larger difference is that in .NET there are 2 different JIT compilers, with different goals

The .NET 64-bit JIT was originally designed to produce very efficient code throughout the long run of a server process. This differs from the .NET x86 JIT, which was optimized to produce code quickly so that the program starts up fast. Taking time to compile efficient code made sense when 64-bit was primarily for server code. But “server code” today includes web apps that have to start fast. The 64-bit JIT currently in .NET isn’t always fast to compile your code, meaning you have to rely on other technologies such as NGen or background JIT to achieve fast program startup.

However one benefit of RyuJIT (the next generation JIT Compiler) is that it’s a common code base for 32-bit and 64-bit, so when it comes out, everything may change! (BTW RyuJIT, what a great name)

For reference the assembly code that is generated in both cases is available:

But there’s still more to do

Even though this post is over 2000 words longs, it still hasn’t covered:

And there’s even more than that to worry about, see the complete list below, taken from this discussion thread on the excellent mechanical sympathy group:

Note: these are only the headings, the discussion goes into a lot of detail about how these issues are solved in JMH. But whilst the JVM and the CLR do differ in a number of ways, a lot of what is said applies to writing benchmarks for the CLR.

The summary from Aleksey sums it all up really!

The benchmarking harness business is very hard, and very non-obvious. My own experience tells me even the smartest people make horrible mistakes in them, myself included. We try to get around that by fixing more and more things in JMH as we discover more, even if that means significant API changes….

There’s lots of really good information out there related to writing benchmarks and understanding what the .NET JIT compiler is doing, below are just some of the links I’ve found: