Apologies to Nitsan Wakart, from whom I shamelessly stole the title of this post!

The .NET port of HdrHistogram can control the field layout within a class, using the same technique that the original Java code does.

Recently I’ve spent some time porting HdrHistogram from Java to .NET, it’s been great to learn a bit more about Java and get a better understanding of some low-level code. In case you’re not familiar with it, the goals of HdrHistogram are to:

You can find a full explanation of what is does and how point 1) is achieved in the project readme.

But it’s the 2nd of the points that I’m looking at in this post, by answering the question

How does HdrHistogram minimise its overhead?

But first it makes sense to start with the why, well it turns out it’s pretty simple. HdrHistogram is meant for measuring low-latency applications, if it had a large overhead or caused the GC to do extra work, then it would negatively affect the performance of the application is was meant to be measuring.

Also imagine for a minute that HdrHistogram took 1/10,000th of a second (0.1 milliseconds or 100,000 nanoseconds) to record a value. If this was the case you could only hope to accurately record events lasting down to a millisecond (1/1,000th of a second), anything faster would not be possible as the overhead of recording the measurement would take up too much time.

As it is HdrHistogram is much faster than that, so we don’t have to worry! From the readme:

So how does it achieve this, well it does a few things:

Update (2014-09-03): As pointed out by Nitsan in the comments, I got the wrong end of the stick with this entire section. It’s not about false-sharing at all, it’s the opposite, I’ll quote him to make sure I get it right this time!

The effort made in HdrHistogram towards controlling field ordering is not about False Sharing but rather towards ensuring certain fields are more likely to be loaded together as they are clumped together, thus avoiding a potential extra read miss. 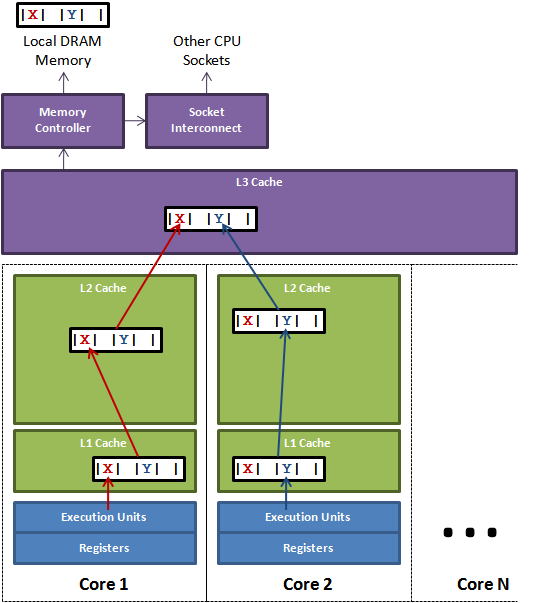 Image from the Mechanical Sympathy blog

Analysing the memory layout of a .NET Object

To do this you need to drop down into the debugger and use the excellent SOS or Son-of-Strike extension. This is because the .NET JITter is free to reorder fields as it sees fit, so the order you put the fields in your class does not determine the order they end up. The JITter changes the layout to minimise the space needed for the object and to make sure that fields are aligned on byte boundaries, it does this by packing them in the most efficient way.

To test out the difference between the Histogram with a class-hierarchy and without, the following code was written (you can find HistogramAllInOneClass in this gist):

Then to actually test it, you need to perform the following steps:

Once the debugger has connected back to VS, you can type the following commands in the “Immediate Window”:

If all that works, you will end up with an output like below: 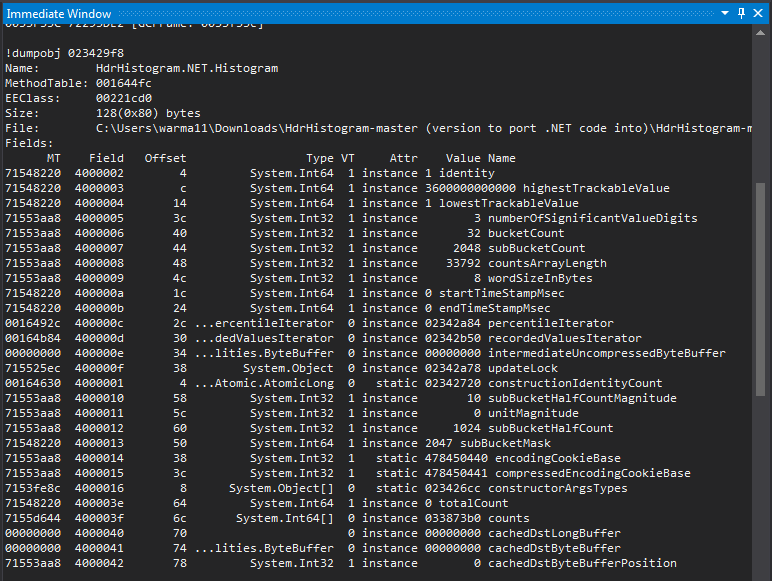 Since first writing this blog post, I came across a really clever technique for getting the offsets of fields in code, something that I initially thought was impossible. The full code to achieve this comes from the Jil JSON serialiser and was written to ensure that it accessed fields in the most efficient order.

It is based on a very clever trick, it dynamically emits IL code, making use of the Ldflda instruction. This is code you could not write in C#, but are able to write directly in IL.

By putting this code into my project, I was able to verify that it gives exactly the same field offsets that you can see when using the SOS technique (above). So it’s a nice technique and the only option if you want to get this information without having to drop-down into a debugger.

After all these steps we end up with the results shown in the images below, where the rows are ordered by the “Offset” value. 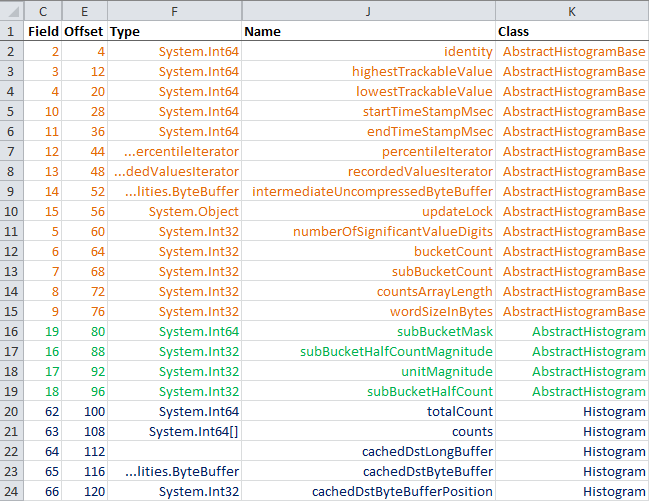 You can see that with the class hierarchy in place, the fields remain grouped as we want them to (shown by the orange/green/blue highlighting). What is interesting is that the JITter has still rearranged fields within a single group, preferring to put Int64 (long) fields before Int32 (int) fields in this case. This is seen by comparing the ordering of the “Field” column with the “Offset” one, where the values in the “Field” column represent the original ordering of the fields as they appear in the source code.

However when we put all the fields in a single class, we lose the grouping: 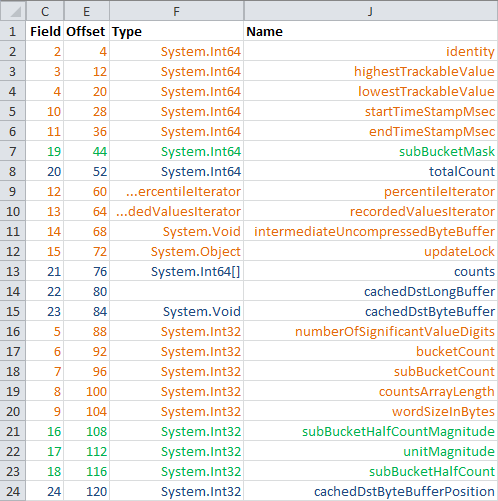 Equivalent fields all in one class

To achieve the same effect you can use the StructLayout attribute, but this requires that you calculate all the offsets yourself, which can be cumbersome:

If you are interested, the full results of this test are available